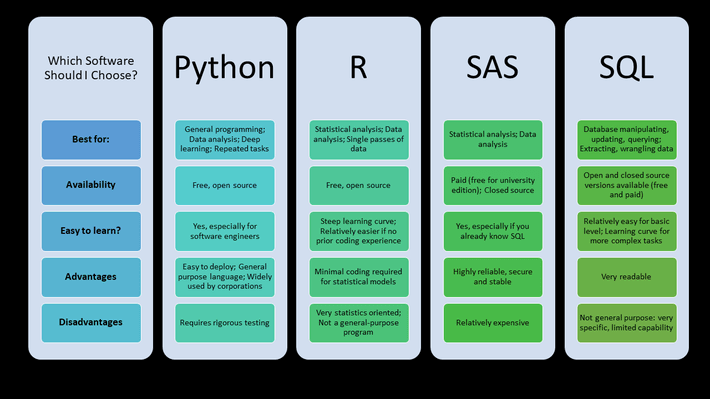 Data scientists help us solve real-world problems using data science approaches and give us business predictions, some of which have changed the face of businesses globally. So, what tools do data scientists use in their day-to-day routines?

Today we are going to learn the specialized tools and programs. That data scientist used for data cleaning, analysis and modeling. For starters, Excel is the most widely used program by data analysts although less relied upon by data scientists.

Let’s dig in and find out more.

What Are the Most Common Tools for Data Science?

What tools do data scientists use? Let’s find out. The most used statistical programming language by data scientists is Python. Others in this list include SQL and Tableau. Even by traditional understanding, data scientists have the highest level of experience and training in languages such as Python and related technologies based on their work.  The image below best describes the tools used in data science.

To better understand the tools used by data scientists, we are going to group these tools in terms of programming languages, tools for machine learning, and tools for data visualization.

What Are the Most Popular Data Science Programming Languages?

Python, on the other hand, is a general-purpose programming language, which also is best for data analysis operations. Data scientists use these two languages to run complex statistical functions, which may include linear and nonlinear modeling, time series analysis, regression analysis, and statistical tests.

R is commonly deployed in situations that have smaller datasets.  for natural language processing applications, Python is most preferred. Hadoop-based tools like Hive are used majorly in cases where serious heavy number crunching is required.

In terms of data scientists’ favorite tools, RStudio Server stands out providing data scientists with a development environment R is needed to run on a server. Other open-source tools such as Jupyter Notebook, which support functions such as statistical modeling, data visualization and learning, are also common.

What tools do data scientists use? Machine learning tools.

For machine learning, tools highly rely on artificial intelligence to give them the capacity to learn and become more accurate without the need for explicit programming. This data science tool that I used for machine learning highly depends on the application at hand. An example could be when you are training a computer to extract trends from social media posts or identify images.

Accord.Net, TensorFlow, h2o.ai and Apache Mahout are some of the tools used by scientists for machine learning, depending on the objective at hand.

What Tools Are Used for Data Visualization?

Data visualization can be very interesting. The tasks involved in data visualization, which by far revolves around presenting data in an endless array of charts and graphs, are primarily an art much as it is a science.

Data visualization tools such as Tableau, PowerBi, Plotly, Infogram, and Bokeh allow data scientists to transform millions of unwieldy data points into simple yet beautiful, chord diagrams, scatter plots and heatmaps that are easy to read.

Other tools that also take center stage in the life of data scientists include SQL programs such as Microsoft SQL, Oracle, MySQL and spreadsheet programs, especially Microsoft Excel.

Although most people don’t fully utilize the power of Excel in making calculations or graphs by correlating the data in the cells, it has remained a useful tool in the life of data scientists.

Although the above tools are almost common to all data scientists, with the rise of new highly specialized programs, there is a long list of tools used by data scientists and much of the choice of a tool depends on the complexity of the case at hand, the objectives and how one is familiar with a program.

Sign Up for our Data Science Career track Bootcamp

Learning data science without working on real-world projects makes no sense. At PlumlogixU, you’ll complete at least 2 major capstone projects worthy of your portfolio as a data scientist.

Besides, you’ll work on and complete small projects that reinforce specific technical aspects learned throughout the Bootcamp. These are projects you can show to your future employers soon after graduation.

What Skills Do You Need to Be a Data Scientist According To Data Science Experts?

5 Expert Tips On How to Become a Cybersecurity Analyst